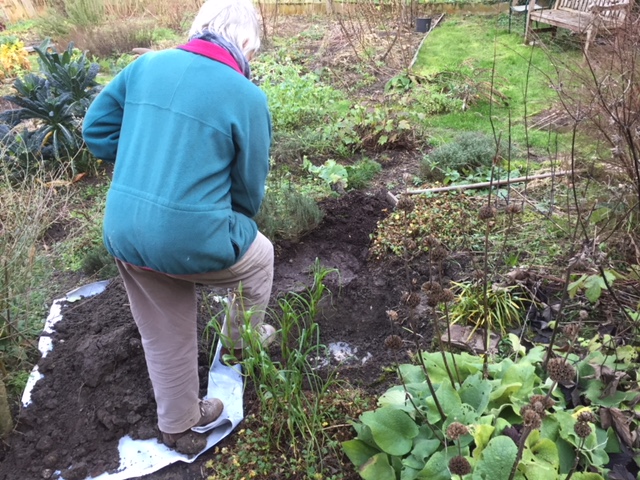 I don’t do ‘new year’s resolutions’. But in 2018 I will be writing regularly here, where for the last few years my energy and attention have simply been elsewhere. Not that I haven’t been present and engaged on the land and in the house – I just haven’t been writing about it for the rest of the world.

For a personal update – on 1 January 2018 I became a(n albeit prematurely) retired person! This month sees me relinquishing my final home in Brussels (I’ve lived in 7 different ‘communes’ in my 30 years there) and moving lock, stock and barrel to Ransberg… shedding many locks, stocks and barrels on the way, to a variety of appreciative new homes.

What has stood out for me in recent months of life at 136 Dorpsstraat has been a more intense and intentional relationship with our ‘neighbours’. I don’t mean just the folks literally next door, but people that we have encountered over our years here who share the same kinds of concerns about finding alternative ways of living that consume fewer resources, shorten the production chains and stay as close to ‘nature’ as possible, all the while regenerating a sense of community. We have discovered that there is much to learn from and with each other and much enjoyment to be had in just hanging out together in companionable creative activity. I’m sure I’ll be sharing more stories about these good people and their passions as the year progresses.

The story that is living inside me for this post, though, relates directly to one of the core intentional practice patterns of The New Life:

I think it goes without saying that it is easier to practice generosity than facilitate that practice for others… by asking for help! In this instance, the Kosmic Agent that invited us into practice was a block in the drainage pipes leading away from the septic tank that normally protects us from any direct relationship with our grey water and the goodness that flushes down our one ‘conventional’ toilet. This new situation brought it back up into our kitchen sink, followed, a few hours later by an almighty, gurgling burp and, much more alarming, a fragrant pool spreading out from under the fridge – suggesting a leak in a pipe under the stairs that we cannot get at without demolishing part of our living room. Oops…

We were quite a few days without showers or baths while scratching our heads over how to get to the bottom of the problem. Perhaps the septic tank was full and needed emptying? Did that. Phew! Now we can wash ourselves again… But no. Repetition of same unsavoury and worrying symptoms. 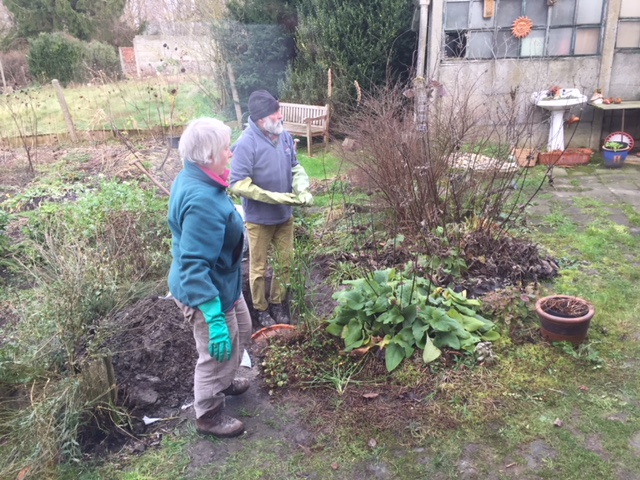 The usual reflex (at least in ‘civilised’ society) is to call the plumber. But when you’re out in the country and not attached to the main sewage system, this can add up to major expense. As it happens, all our current pocket money and piggy banks are being channelled into the renovation of the two front rooms (in preparation to receive my stuff from Brussels), so that was a solution to avoid. However, while calling the plumber is a nice, clean, transactional interaction, where money changes hands and there is no further obligation, asking for help freely given implies an ongoing relationship of reciprocity and mutual obligation that society at large seems to have lost the capacity to sustain.

We are lucky, therefore, to have a delightful ‘go-to’ man for these technical problems, in the person of Guy who lives down the road at the house with the Oxfam banner fluttering outside the door and all the chickens in the yard (that you see only when invited inside). And Guy, when applied to, has one of those black snakes that you can feed into dark pipes and, if propelled by pressurised water, will eat its way through blockages (provided they aren’t brick walls…). The source of pressurised water, though, was not forthcoming. We didn’t have an attachment to connect the snake to the hosepipe. And the tap feeding the hosepipe isn’t what you’d call pressurised. So another step was needed.

Since Ria was busy papering the walls in the front room and doing her quarterly taxes, Chrisje was unwell and out of energy and Steve (my beloved, nomad-on-a-visit partner) doesn’t speak the language, it was up to me to overcome my trepidation, arm myself with my ignorance and Guy’s snake, and go ring at the bell of the neighbour on the other side – Geert – whom observation over the years has revealed to have every imaginable piece of kit a householder and smallholder might require – to ask if he might have such a water-compressor gadget… which, indeed, he did. Along with a snake designed to fit it! 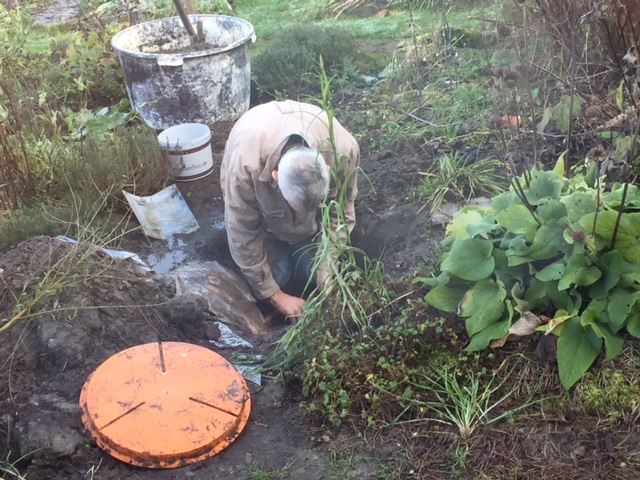 Steve being a true-blood hero

Intra-species communication among humans being what it is (a very hit-and-miss affair), I had to go back round there three times before we managed to get the contraption working. Yesterday, finally, Steve put in the wet, muddy work to bore through the blockage and restore the flow. Ria and Chris celebrated by leaping into the bath tub later that evening (well, we had to test the system, yes?!) and lo, when the plug was pulled, a lovely glugluglu ensued, with NO reflux and NO burp.

All that remains to do is return all the loaned equipment, with thanks and some appropriate home-made token of appreciation (a pot of raspberry jam comes to mind), and an expression of desire to remain in neighbourly relationship on a more regular basis.

It feels good to share this story – as the first of many, now that I have the spaciousness and the calling to revive this humble blog, which is so dear to my heart.